Dear Team,
I have a SW4000Q line scan camera which delivers RGB and NIR streams. I noticed strange behavior when operating the camera at maximum resolution. The maximum resolution the camera can handle is 4096x4096. So at this resolution, I can set the line rate to a maximum value of 72 kHz for an exposure time of 10 us. With this settings the FPS of camera comes to around 16 to 17 FPS. Now, using CVB++, I am trying to acquire the images from both the streams for a total of 10 secs. Ideally I would expect the camera to deliver 160 images per stream. But, the camera only delivers around 80 to 90 images per stream. This behavior is not seen at lower resolutions like 2560 x 2048. If I reduce the resolution, for the maximum line rate the FPS goes upto 33. I also see that 330 images per stream getting delivered from the camera which is as expected.

Any help regarding this is appreciated

I am not entirely sure what the cause is, but one thing that strikes me as odd is the transfer rates involved here.

So the total transfer rate at reduced resolution is practically more consistent with the 9 fps at full resolution than with the theoretical maximum data rate of 1 GB per second.

Generally speaking, our experience with 10 GigE is the following:

Can you provide a bit more detail on your setup?

as already told there are several factors which might limit you maximum framerate and bandwidth.

First you should be aware about the topology of your mainboard and CPU you are using.

Only the PCIe bus provided by the CPU can deliver appropriate bandwidths for image acquisition. The chipset of some mainboards are providing PCIe lanes as well. But those are most likely very limited in the bandwidth. Some lanes could even share the bandwidth with other lanes also resulting in a reduced bandwidth.
Because of the used Ethernet protocol CPU utilization could be very high when using 10GigE resulting in packet loss. We are recommending the following settings for the NIC in order to keep CPU load low.

In addition we have to minimize the amount of interrupts the NIC could perform and therefore disrupt the complete system, even on multicore systems (setting: Interrupt Moderation Rate).

Up to this point we have just enabled the usage of so called Jumbo Frames. We have to tell the driver on the host system to actually use the large packet size. The image of the CVB GenICamBrowser is showing how to configure the packet size used by the camera.

The packet size must be divisible by four with no remainder. When the NIC is supporting a packet size of 9014 Bytes I would recommend to set the packet size to 8192 Bytes in CVB.

Beside hardware limitations Windows could also be resonsible to limit you bandwidth. Windows could throttle link bandwidth in order to lower CPU load and prioritize multimedia applications. Please note that this setting is not related to QoS (Quality of Service) mechanism of Windows.

The throttling of the bandwidth can be disabled by using the registry key NetworkThrottlingIndex. This key is stored under the following path.

For HEX value 0xffffffff thorttling is diabled. To enable throttling again the HEX value 0xa has to be used.

3. CVB Statistics
CVB could output various statistics helping to determine the bottleneck of the system. The following image is showing the statistics when system performance isn’t sufficient to sustain the frame rate. The driver is receiving corrupt or incomplete images. 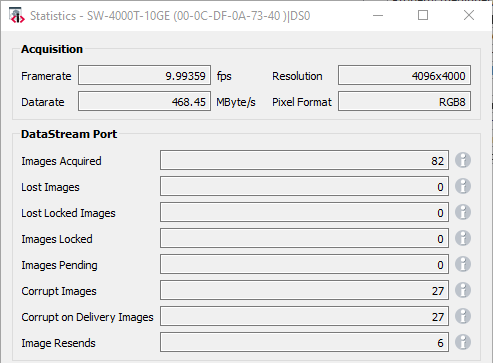 When the NIC is receiving corrupt images possible reason is a bad Ethernet cable. In this case the packets are already corrupt when received.

Another possible reason for packet loss on the NIC is that all internal buffers have been already used. In this case new received packets have to be discarded.

When using CVB we could get another statistics directly from the acquisition driver. CVB is providing a command line tool in the subfolder “%CVB%\3Hardware\StemmerImaging\Utilities”. Name of the tool is “GevFDDiag.exe”.

The second most likely reason for packet loss is the CPU itself. Because of the used protocol each packet is causing little CPU load. Please check the CPU usage using Windows Resource Monitor. 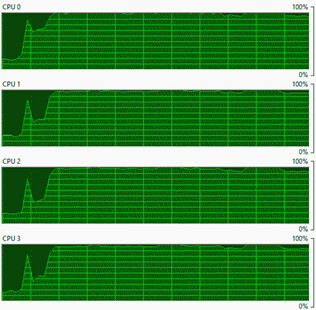 You can also use some third party tools like HWiNFO64 to gather more information’s about the system. A bunch of values concerning RAM and PCIe connection are shown. In addition the speed of the former front side bus which is called Ring Bus on some Intel Core CPUs.

The tool is outputting some sensor values as well. The following values indicate if the internal BUS of the CPU or graphics chip is limiting. 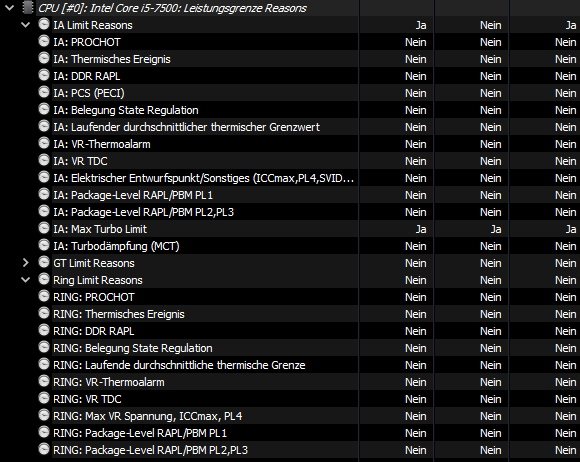 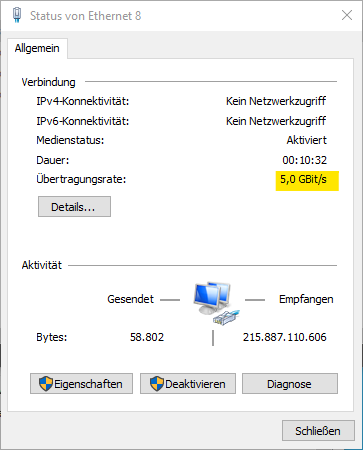 What adapter are you using?)

what CPU are you using? 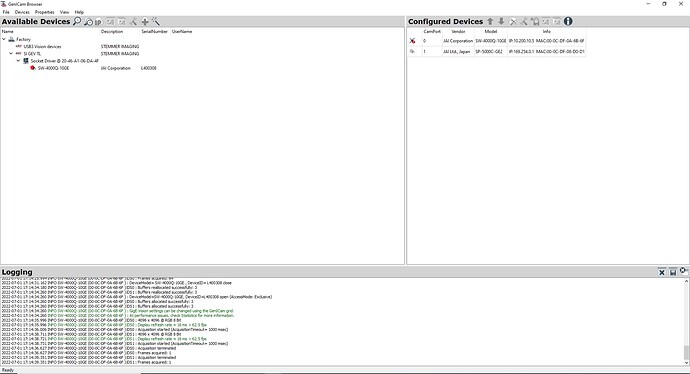 I see this issue occurring only with the GeniCam Browser and CVB (even with CVB++). When I try the same thing with Jai control Tool, the camera opens and closes normally as expected. I have been facing this issue for the past 2 weeks.

@illusive Could this be happening because of the issue I raised here ?

this with the LAG setup right? Or without?

hi @c.hartmann
This happens with and without LAG setup.

Hi, It is possible to dedicate a specific CPUs to Jai Program, which they usually recommend that. Do you use this setting?
How many physical CPUs do you have? Is Hyper-threading activated?

Hi @MandanaS
I have 8 cores in my processor. Currently, i dont think we are dedicating any specific cores to the JAI program. I can try this setting. Let me also check if hyper threading is enabled

When the problem still persists using CVB LogGUI would help greatly. I will cover the LogGUI in a later post if you like.