How to trigger multiple cameras simultaneously

we are currently in the process of designing a measuring device with a AlliedVision Manta G-223B BL-FC200-MCS.
We now have the question of triggering multiple cameras (2 - 4) simultaneously.
I have found this comparison by AlliedVision: Trigger over Ethernet versus other trigger modes

There is also the option of using a hardware trigger that

I had thought about that as well.

If using option 2:
Triggering 3 or 4 cameras from a single output would exceed its maximum current rating, right?.
That means I would need some kind of relay? Probably solid state for speed?

Thanks for your help.

This is correct I think. You’ll need an additional circuit or signal controller. Maybe @KVo can chime in.

Hi, according to the user manual one output can only drive up to 10mA.

Each input will draw 4mA approximately.

The camera is providing the two outputs Out1 and Out2. Each output could drive two camera inputs in parallel.

When only one output can be used I would recommend a so called Timing Controller which is outputting a copy of the input signal. The controller is providing eight inputs and eight outputs, each capable to drive up to 50mA.

Please refer to our homepage for a datasheet for the Timing Controller called CC320. For example the wiring of a single AV MANTA with the CC320. More cameras can be added in the same way. 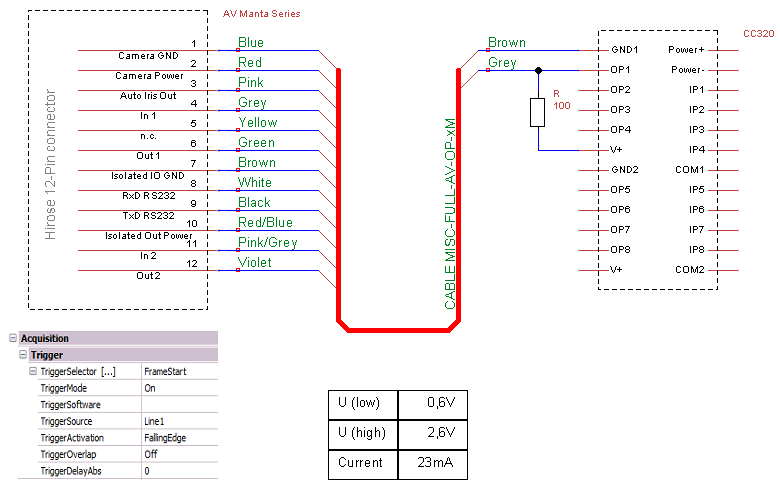