Writing Pixel Values to an Array

I want to get the pixel greyscale values (0-255) from the whole ROI (around 4000*200 px) to an array.
I’ve tried to do this with the GetPixel function, but then program does not react anymore because of an overload.

With access to the VPAT it should work more quickly, according to the helpfile.
I’ve tried to do it like it is in the CSVPAT tutorial but that hasn’t braught me further yet. 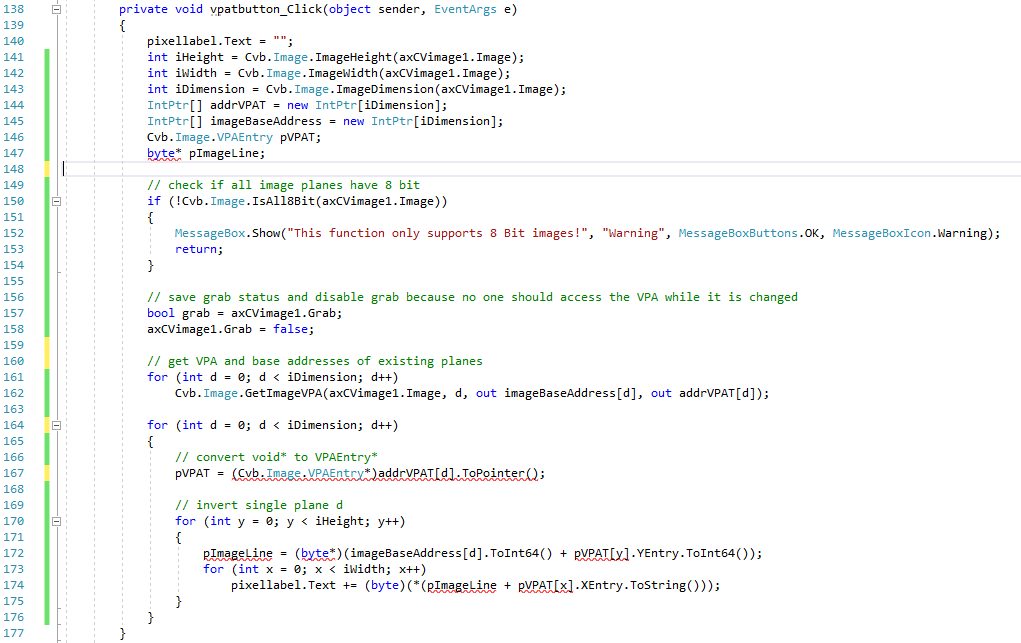 The red underlined variables are commented “Pointers and buffers can only be opened in an uncertain context”?

Is this the quickest way to get the whole pixel values from an image (axCVimage)?
How can they be written in an array?

According to your screenshot and the fact that you had a look into the CSVPAT tutorial, I assume you are working with C# and windows forms.
The compiler errors you get are, because you have to make your method an unsafe method in order to be able to use pointer arithmetic under .NET.
You also need to allow unsafe code in your solution settings.

Another way to access the pixel values is to use Linear Access (Search for GetLinearAccess() in the documentation).
If you need a code snipped, that explains how to access image data via linear access, just let me know, but it shouldnt be to hard to get something running with the documentation

As @Chris pointed out, unsafe is one of the key issues here. The keyword unsafe allows coders to use pointers very much like they did in C or C++ in C#. unsafe blocks are scoped - either by means of curly brackets {} or through function scope. In your case I think function scope fits better: You’ll need to modify the function signature to

Note that you’ll need to enable unsafe code generation in your project (off by default…):

Without checking the highlighted box the use of the keyword unsafe will result in a compiler error.

Please note that there is a conflict between the lines 147 and 167 in your code: pVPAT has been declared as a Cvb.Image.VPAEntry, but it should be a pointer to a VPAT entry for the code further down to make sense. Please also have a look at line 174 - I think what you intended to write was something like

I’d also want to warn about line 157 and 158. The plan here seems to be disabling the grab while the pixel value array is being copied and restart grab once that has been done (I guess that is what the variable grab is going to be used for). Situations where such an approach is necessary certainly exist, but nevertheless I would like to point out two things:

As for your question about processing speed:

@Chris & @illusive Thank you very much for your detailed response. That helped me a lot! Now, it works and much faster than before. It just takes around 4 seconds to export the whole Image (Mono 8Bit) to a txt file.
How much faster could it be with the use of linear access? I think the requirements are fulfilled, anyway the image isn’t rotated.
To which points has the code to be changed for that? 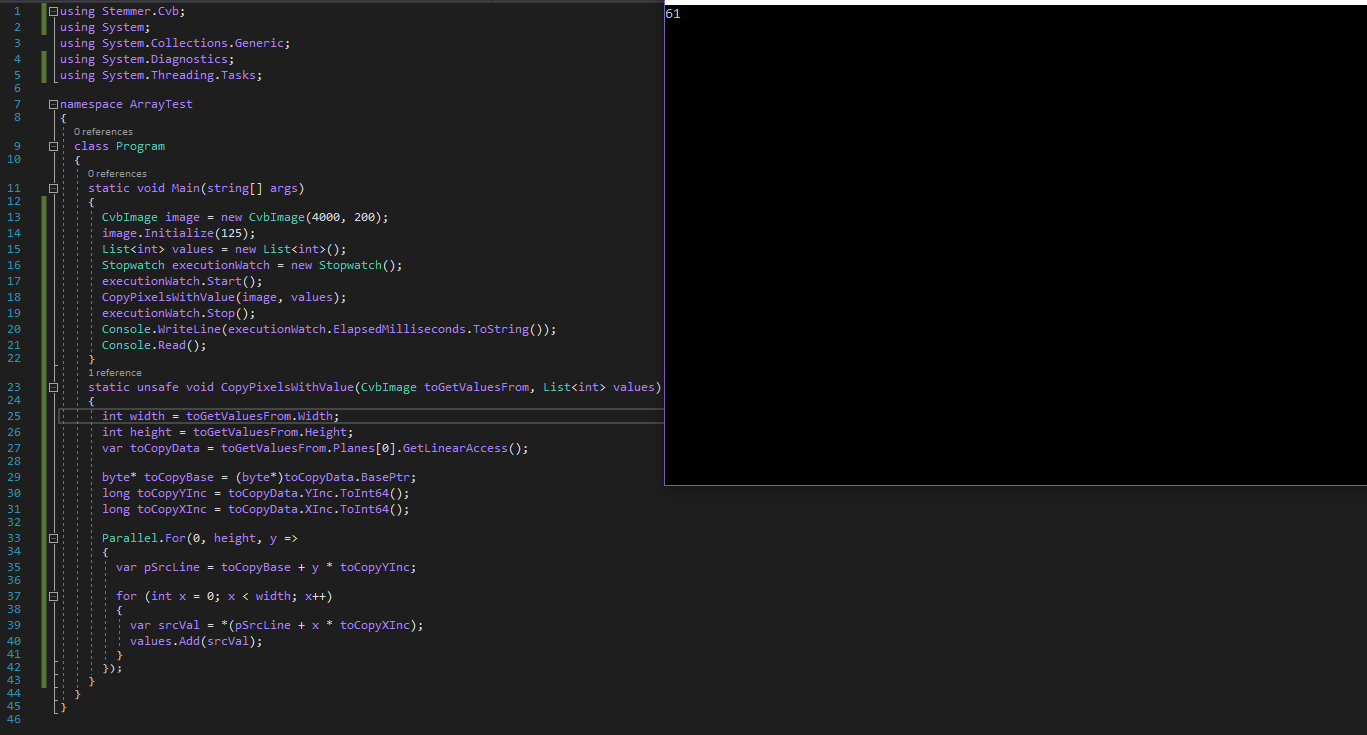 - however I’d prefer copy&pasted code over a screenshot here

. And remember we’re in the C-Style API section here - can you translate the CVB.Net based code accordingly?

(@mave: You’ll have to take the milliseconds with a pinch of salt because the output to strings/text file will also take some time for a reasonably big image)

@mave This should be pretty much copy-pasteable right now

@Chris: There is a memory leak left: either use SharedImg or ReleaseObj to clean-up the created IMG.

@parsd Thank you for pointing that out, I feel quite bad about that mistake as it is such a simple thing to take care of.
@mave This is the point where @illusive’s hint to use copy pasteable code takes effect as I’m not able to correct this mistake in my screenshot.
However, I have edited the code example to avoid someone copying the faulty version.

it takes 211 milliseconds to save it to a textfile. Thats considerably more than i needed.
Thats really a great support here. Keep up with this great work