When I do the similar thing with Teledyne Dalsas CamExpert it works fine, i.e. the saved .tiff image is 48 bit RGB (with each color channel converted from 12-bit to 16-bit) so seems to be working fine.

How can I save the 12-bit RGB image with Common Vision Blox? What am I doning wrong?

To what setting have you set the color format in the GenICam.vin INI (via GenICam Browser)? I think it has to be either raw or 16 bit (what would be 12 bit packed). And you have to acquire the image through the VIN driver. If you go through the GCBrowser and save the image there, I think you are operating directly on the transport layer and thus not using the settings of the VIN. 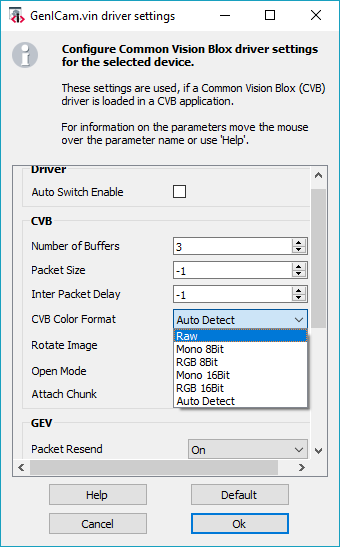 You could open the GenICam VIN in CVB Viewer and save the image as a TIFF there for a quick test.

I followed your instructions and it works. Thanks for the help!