Duplicated timestamp retrieved from a camera

I used CVB library 2016.
I made a simple program that acquired images from camera using a direct translation of the C api for .Net. The camera is connected to the PC via Ethernet. The camera is trigger by an external component every 5 seconds.

The idea is to acquire the images from the camera with the related timestamp (timestamp when the image was acquired by the camera) and the imageId of the image.

Everything is going well (smooth) in a normal execution.
However I noticed during some tests, a really strange behavior when I overload the CPU, the disk and the network.
It happened that when I ask the timestamp from the image, using the CVB api, I got back a duplicated timestamp.
This is a really strange, indeed when I sniff the traffic from the camera to the pc (using wireshark), I noticed that the timestamp is never duplicated. Therefore I can concluded that the timestamp sent by the camera to the pc is correct and the problem is not in the camera itself. This test that I have performed (duplicated timestamp) is easy to reproduce and it occurs often when I overload the pc where the acquisition sw is running.
Did you know why this happens? I assume the image is retrieved in atomic why by the CVB library, therefore the Image Id and/or the timestamp cannot be duplicated.
Am I doing something wrong, or there is problem in the CVB library?

The simple task that acquire images from a single scanner is:

Thank you in advance for your help.

do you also see these duplicate timestamps if you use G2GetGrabStatus?

Yes. I have noticed duplicated timestamp using both way to retrieve the timestamp:

The strange thing is that the imageID retrieved is NOT duplicated.

Thank you in advance.

The log you attached is for the correct case, I assume.

Sorry, did not see the duplication on my small mobile phone display.

Regarding the socket driver

Both when using the configuration method (GenICam.ini) and the new discovery interface, you have, for GigE Vision, the choice between

The filter driver is only available for Windows (and it is the default here). You can switch the driver type e.g. in the 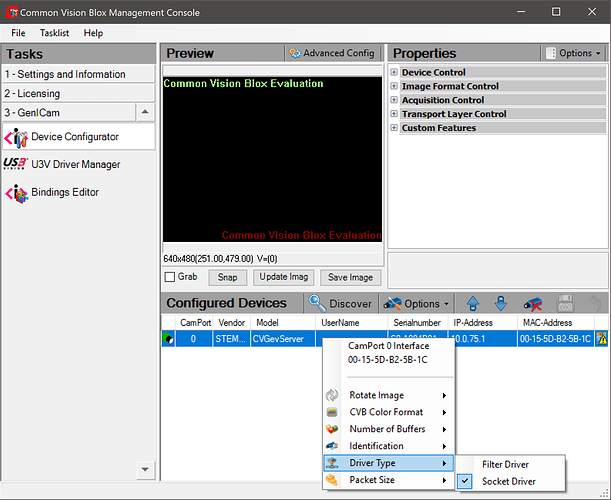 The erroneous row (6th after 2nd) is also curious. Could you please attach your GenICam.ini file:

Logging the buffer index (RBBufferSeq) would also help. It looks a bit like all the data for a buffer has been updated except its timestamp.

There have been changes to the buffer handling – especially when buffers are converted. Maybe this also fixes your issue.

If I understand correctly from the last part of your answer, there is a bug in the previous version of the CVB, since everything is updated except its timestamp?

We are currently not aware of a bug as you see it. I’ve seen in the release notes that the timestamp handling has been fixed in certain chunk scenarios (I can’t check the source code as I am not in the office this week):

I didn’t get the part with the versions and the GenICam.ini: do you have restrictions using

2017? When updating we do not overwrite the GenICam.ini.

Yes, the filter driver reduces CPU load because it reduces the number of kernel/user mode transitions: so you should use it in production. I asked it of you only to determine the source of the error as socket and filter driver have different implementations. Also this can be quickly tested without much work to be done. If you don’t see the duplicated time stamps with the socket driver, we have pinned down the module.

If the issue remains we need to know the exact camera model and configuration (camera and GenICam.ini). You can also open a support ticket with us:

Versions and GenICam.ini
Sorry I misunderstand, I thought you were talking about the “GenICam.vin” and this one is overwritten when a new version of the CVB library is installed.

Filter Driver vs Socket Driver
I will make some test also using the socket driver as you suggested.

GenICam and camera model
I attached the GenICam.ini file. The model of the camera is: AT Automation Technology GmbH - C4-2350 GigE GenICam.zip (1.2 KB)

Thanks you for your help

We were able to further investigate the error of an older timestamp under high system load by now. The error occurs when frames are corrupted due to missing packages under high system load. In order to create a “smooth” process when calling “wait” it will return everything in the image buffer as long as it is valid in the sense that the buffer is ok and there are no “hard” errors which would break the aquisition. This will then potentially also return corrupt frames and leave it to the developer to decide what to do with the image.
Checking the timestamp may yield an older timestamp if an image was only partly updated. To minimize this issue please try to: